The Town Library of Nagykanizsa, the Halis István, is the biggest public library in South-Zala and was founded on 1st May, 1951.

Although other libraries with educational aims existed before this time, we can only really speak of public libraries in their present form from 1951. The history of the library, including the development of its collections and services, has been unbroken from this point. Unfortunately, our library did not have the opportunity to completely take over the collections of earlier libraries in the town and only inherited a few documents from a previous town library and museum which had been in operation since 1919, its contents having been in the care of Halis István for a longer period.

The actual site of the library has changed a lot since its foundation. From 1951 to 1956 it operated in the Town Council building at number 1, Ady utca only to later move to the former Craftsmen's Association building in Sugár ut. In 1987, because of the dangerous condition of this building, it moved again, into what had once been a Franciscan monastery. Most recently, as a result of government funding, a new purpose built library building was handed over on 20th August, 2001, on the 50th anniversary of the foundation of the library, and in the millennium year of the foundation of the Hungarian State.

This building, with its 4000 m2 floor area, represents an investment of some thousand million Hungarian forints and has become one of the jewels of the town. With its exceptional construction and facilities, the library is able to provide people from Nagykanizsa and the surrounding area with a much higher than average level of service.

At the time of its relocation in 1956, the collection consisted of 6159 items. At the same time the children's section of the library was initiated and 1963 saw the start of the acquisition of audio recordings which by the year 1979, had developed into a significant collection of some 1200 records. In the same year we started the music section of the library adding the loan of these records to our other library services.

From its very beginning, the library has worked to organise the donation, and later, the acquisition of materials and their systematic maintenance to provide services for, and in, some fifty settlements within the area. Since the sixties a significant part of our collection has been available direct from our shelves and today, the collection has reached a total of over two hundred thousand items.The library has, for decades, subscribed to hundreds of journals, newspapers and magazines, most of which, and all of those concerning Zala County, are retained. The journals of Nagykanizsa, volumes no longer available, are also viewable on microfilm and due to the efforts of recent years, some are accessible in digitalised form.

In parallel with that of our collection, the development of our range of services has also been a priority. As time and technology advance we have accordingly introduced new services; photo-copying in the eighties, video rental in the early nineties and computer services from before the turn of the century. Since 1972, along with their other duties, trained librarians have been available to assist the public with any enquiries regarding research or any other quest for information or reference materials. From the nineties, such work has been revolutionised by the advent of computer technology and the internet. In the new building each librarian has their own computer and speedy access to the internet. There are also 25 computer terminals available for public use. 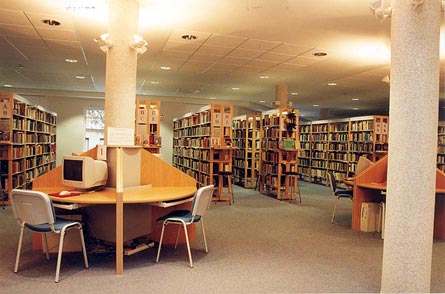 The new building has been open to the public since 1st October, 2001.and since then we have successfully expanded our range of services whilst maintaining a constant workforce. The number of visitors we receive daily is fast approaching the 500 mark.

The institute, which was named after Halis István, plans to continue working to honour his memory and keep alive the spirit of his work by ensuring that traditional library services are upheld and, at the same time, strive to remain abreast of current technology and changing needs and in some ways redefine the model of a library. The most important responsibility of any library is to ensure access and availability. To satisfy the demands of the public, it is our responsibility to guarantee that everything within the library's own collection and that which can be retrieved from other sources, is accessible. To this end, our entire physical collection, books, journals videos etc. are to hand on our shelves and protected by a security system. We have also developed internal connections within our own organisation and external ones with other libraries and sources and it is with these, together with our internet capabilities, that we hope to ensure the fulfillment of any of our customers' requirements either for items to borrow or for any data, information or documents they might request.

The library's entire catalogue is published on the internet for anybody to read and our web page also contains all the important information about the library. Moreover, the digitalised content is constantly increasing, the cultural events and programmes of the town for example, have been available in this form for some years now.

The brief for the design of the building included providing a space for use by the community as a whole, whether this be for events organised by the library itself or by other individuals or local clubs, groups and organisations. The competitive chess players of the town practice here, pensioners' groups meet here from time to time and the Town Assembly convenes here on a regular basis.

Our knowledge and expertise is not confined to solely responding to the enquiries of the public. We also provide courses with the aim of giving our customers the tools necessary for them to become independent users of our facilities by educating them in the use of the catalogue, microfilm archives and the internet, in fact, all the facilties and equipment within our institution.

We also contribute to the education of new generations of librarians thanks to a close relationship with institutions concerned with the training of librarians.

Between 14th and 16th August, 2003, our library hosted the 35th Congress of the Institution of Hungarian Librarians which is the most important annual event in the calendar for people in this country working within the field of librarians.

The library of Nagykanizsa occupies a special place in our fragmented world. It is a place of work, of study, of entertainment and of social life. People living here can take advantage of the facilities we offer in every aspect of their lives, a library providing an ever widening, open gateway to the world.